When we think about the ammonia and nitric acid industry, its compressors are some of the first pieces of equipment which come to mind! Ultimately, compressors are amongst the most critical assets in this industry due to their role within the manufacturing processes. It must be noted that these compressors also undergo a lot of thermal stress and can be exposed to process gasses. These two conditions are ideal for rapid fluid degradation which can lead to unplanned shutdowns of our most critical pieces of equipment. Typically, chemical changes within the lube system of compressors can result in mechanical challenges such as vibration, bearing temperature increases and valve sticking in hydraulically manipulated controls.

The role of process gasses in compressor fluid degradation

During the manufacturing process for urea, nitrogen, nitric acid and ammonia within fertilizer plants, the most critical piece of equipment is the compressor. These are typically centrifugal or axial in design and require a high quality Rust and Oxidation (R&O) Inhibited oil. The R&O additives have a significant role to play in protecting the insides of the compressor from excessive wear and the onset of oxidation. On the other hand, these R&O additives can also react with primary antioxidant species to produce organic deposits. This may occur if the additives drop out of the solution in an unreacted state or after they have reacted.

Due to the design of the system, most compressors in this field experience some migration of the process gasses (ammonia, carbon dioxide, oxygen or nitrogen) through their seals and into the lube system. These gasses can have detrimental effects on the oil. One such effect is that of ammonia ingression into an in-service oil. Systems which experience this ingression, have typically seen the ammonia gas react with oxidation derived degradation products to create deposits which largely consist of primary amides. In this reaction, the ammonia gas reacts with carboxylic acids to produce the amides. However, the presence of the carboxylic acids may be as a result of oxidation already occurring within the oil. 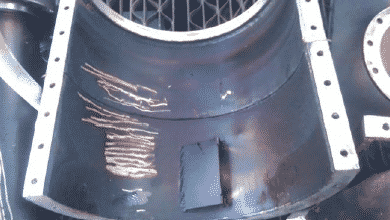 With globalization and the industry’s drive towards becoming more efficient, OEMs have seen significant changes in the demands for their equipment. They are now tasked with delivering more compact, efficient machines which consequently produces more thermal and mechanical stress on the lubricant. In particular, compressor oils are now expected to perform at higher temperatures, in small capacity systems for longer periods of time all while being in the presence of many potential contaminants. Oil manufacturers had to reformulate their products to meet these demands.

The most consequential change for oil manufacturers was the movement towards API Group II and III base stocks away from Group I base stocks. Group II & III base oils have superior oxidative resistance since the hydrocarbon molecules are saturated. While Group II base stocks are more highly refined, they do have reduced solubility. This means that they have a limited ability to keep oil degradation products in solution as compared to their Group I counterparts.

This formulation change also affected the rate at which these new lubricants degrade. Previously, with Group I base stocks, oils degraded in a linear fashion. As such, it was easy to predict the rate of degradation. However, these modern oils do not degrade linearly and this makes it challenging to predict the rate of degradation. This is largely due to Group II & III base oils having a lower natural oxidative stability as compared to Group I base oils. This simply means that when the antioxidants degrade, the base oil has little ability to resist further degradation and will fail rapidly as shown below. 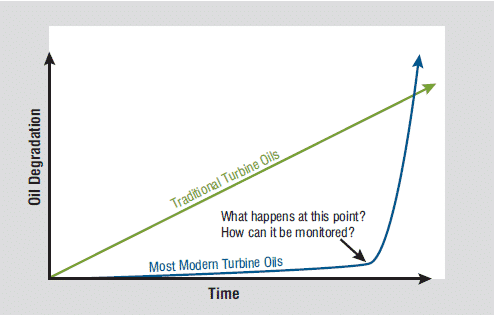 Here’s a quick look at the varying RPVOT (ASTM  D2272) values for Group I vs Group II:

While these values may indicate the oxidative stability of the oils, it is wise to monitor the health of the antioxidants as this has a more significant role in determining the actual life of the oil. By directly monitoring the individual antioxidants, one can more easily trend the degradation of the oil through the rate of depletion of antioxidants.

Once the antioxidants begin to deplete, the first physical impact to the lubricant is the generation of extremely small, sub-micron degradation products. The most common test to detect these oil degradation products is the MPC (Membrane Patch Calorimetry ASTM D7843). Eventually, these chemical changes lead to varnish which impacts the equipment.

Rotating equipment usually requires very close clearances for operation. In particular, they need to operate within a hydrodynamic lubrication regime with a film thickness of approximately 20-30 microns. However, with gas ingression from ammonia, nitrogen or any of the others, different types of degradation can occur. These can lead to the formation of polar products which interact with the white metal surfaces (such as Babbitt material) to form deposits.

After these chemical reactions, when these deposits are formed, they can lead to mechanical consequences such as:

Varnish also acts as an insulator and the greater the degree of deposit formation, the more insulation will take place. As such, the systems will experience increases in temperatures. While varnish may be an insulator, it also changes the microscopic surface of the material onto which it deposits. This way, it adds to asperities on the metal surface which makes it difficult for the oil to maintain a hydrodynamic film of lubrication especially under higher loads. Occasionally, the film will crack causing temporary collapse and creating a metal to metal contact typically in the highest load zone of the bearing. This metal to metal contact can also create new asperities in the surface causing greater challenges for the oil. 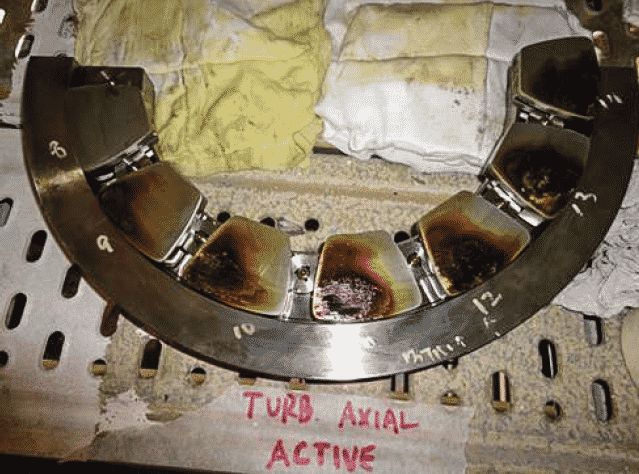 Varnish’s impact is also seen in the control valves. Since varnish is sticky, it hampers the function of the control valve which needs a clean, deposit free area to operate. As oil flow to the control valves is intermittent, this gives the oil enough time to cool and causes degradation products to come out of solution and deposit on the internals of the valves. In turn, this causes more energy to be required to move the valve due to this additional stickiness caused by the varnish.

In essence, chemical changes which result in the production of varnish or deposits can directly impact on the mechanical functioning of rotating equipment, bearings, hydraulic systems, gearboxes and of course control valves. It is important to understand the type of varnish or deposits before attempting to replace components or remove the varnish from the system. Deposit characterization is key to determining the real root cause of the varnish and restoring the system to its high performing levels of efficiency.