Shifting the Mind-set from Consumables to Assets

Shifting the mind-set from consumables to assets

Traditionally, lubricants have been treated as consumables which can easily be discarded and replaced at specified intervals. However with the changes in the economy, the fluctuating prices of natural resources and the impact of processing these products on the environment, these should no longer be treated as consumables. While not all lubricants are created equally, they are all designed to protect the equipment through sacrificial means. In particular for turbine oils, the antioxidants are tasked with combating the presence of free radicals to eliminate the occurrence of oxidation. Let’s explore the options that are available to turn this “consumable” into an “asset”.

A closer look at turbine oils

Turbine oils undergo high amounts of stresses from elevated temperatures to the presence of contaminants. Due to the critical nature of turbines, these pieces of rotating equipment can quickly escalate costs if they experience unplanned downtime especially for extended periods. As such, they are some of the most monitored equipment on any industrial plant. These oils are highly susceptible to varnish which results from oxidation. Therefore, one of the main properties which are monitored in these oils are the quantity of antioxidants.

Within the industry, it is common practice to change the turbine oil when the level of antioxidants begins approaching the 25% remaining limits. At this stage, it is usually deemed that the remaining level of antioxidants can no longer protect the turbine from oxidation or varnish formation which can lead to unplanned downtime. However, this does not indicate that the base oil has been compromised. In fact, most times, the base oil is in a healthy state but users who are concerned about downtime opt for changing the oil completely and treating the oil as a consumable.

In industrial plants, turbines typically have large oil sumps, some to the order of 6,200 gallons (or 23,470 liters!). In some plants, there may be more than one of these turbines. Hence, if these are changed often then quite a lot of healthy base oil is lost as waste oil and new oil replaces this large volume. In one drum of crude oil, approximately 1% is used to produce finished lubricants and this does not include the additive packages. The prevention of having one gallon of lubricating oil from having to be refined, formulated, packaged and shipped to a site reduces the greenhouse gas emissions by approximately 120 pounds. As such, there are a lot of costs which go into replacing one of these large sumps. 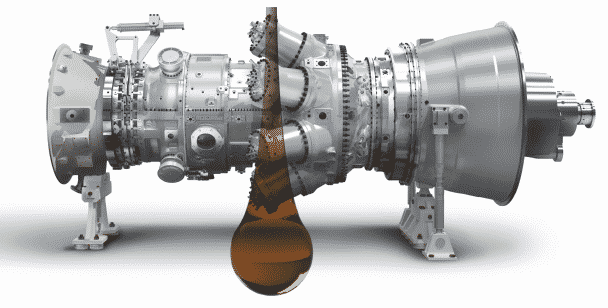 Understanding the impact of degradation

Since the costs associated with changing oils in these larger turbine sumps are higher, we need to fully understand the process of degradation before condemning the oil. The first impact of degradation occurs at a molecular level. As a result these small chemical changes can be monitored using appropriate tests to give users some advanced knowledge about the processes occurring within the oil. However, these small chemical changes may not begin affecting the performance of the oil until they have achieved significant chemical alterations. During this time, antioxidants get depleted and new molecular species are created. This is when we begin to see the physical impacts of these alterations.

In rotating equipment (turbines) in particular, the first physical symptom is usually in the form of deposits. These are typically high in molecular weight and can cause a lot of damage to the equipment. In these pieces of equipment, the clearances are normally very tight and any obstructions (or these high molecular weight deposits) can greatly impact on the performance of the equipment. They frequently lead to sticking valves, elevated bearing temperatures, reduced oil flow and lower heat exchange performance. These all impact negatively on the efficiency of critical pieces of equipment such as turbines.

As discussed earlier, antioxidants are the first set of additives to be depleted. Antioxidants are sacrificial in nature and they get depleted when trying to neutralize free radicals. The free radicals are the first step in the oxidation process before the deposits are formed. These antioxidants are the barrier protecting the base oil from becoming oxidized. Hence, if they get depleted to an unsafe range (below 25%), the base oil can become impacted. However, if these antioxidants were replenished and the oil maintained free of radicals, then the oil can become more of an asset than a consumable.

Eliminating the risks through antioxidant replenishment

Often, oil manufacturers advise against adding any type of additive to the finished oil. All oils are blended to specific ratios of additives based on the type of additive being used and the final balanced performance of the oil. By adding too much of a particular additive to a balanced oil this can disrupt the performance of the oil and cause more harm than intended. However, if properly managed, this addition can potentially save the oil and extend its life. This can be done through determining the oil’s candidacy for replenishment and ensuring that the newly blended oil performs in qualification tests.

DECON AO was formulated by Fluitec using Solvancer® (a patent pending technology). This product replenishes depleted antioxidants and eliminates deposits and varnish from your equipment. It has superior seal compatibility, excellent oxidation stability and deposit control characteristics and no adverse impact on the in-service oil’s performance (i.e. air release, demulsibility, foam etc). The treat rate of this product is based on evaluating the system’s current properties and those of the original oil formulation. Thus, the equipment can have an oil whose antioxidants have been rebalanced and deposit formation is controlled. 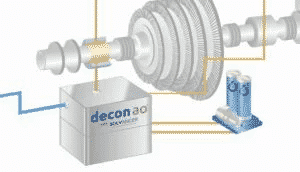 While DECON AO allows the in-service oil to be utilized for longer periods, there is another product which can give these turbines deposit control for up to 10 years guaranteed. Infinity Turbine Oil which is also formulated with Solvancer is developed to ensure that deposits are not formed. This is designed to be used as a full charge of oil to achieve its maximum efficiency but can be added to systems as it is compatible with most oils. It effectively reduces the need for any varnish mitigation technology during its lifetime adding to the cost savings achieved with this oil.

These two products can adequately transform the concept of oil as a consumable into that of an asset based on increasing the longevity of the oil while still performing all of its functions including protecting the equipment. By introducing the concept of antioxidant rebalancing and deposit control, critical pieces of equipment can now achieve this Fill4Life concept and significantly reduce the costs associated with frequent oil changes. This also allows a reduction in greenhouse gases and helps the environment. Let’s change the mind-set of oils as consumables and move them into the assets of our operations.