RPVOT vs RULER, Which is Better? 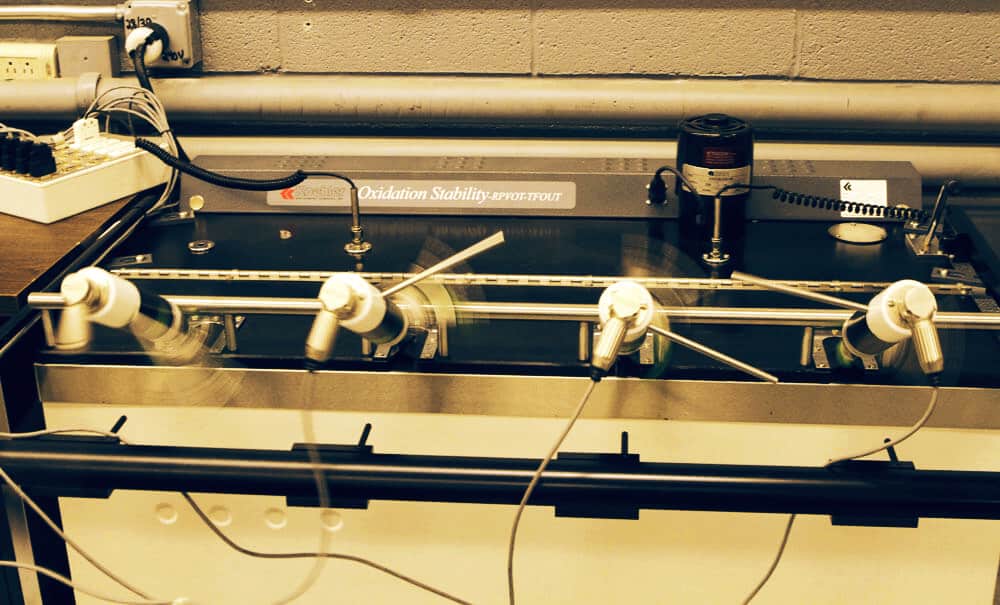 RPVOT vs RULER, Which is Better?

When monitoring turbine oils, one of the questions we often get asked is whether the user can substitute RPVOT for RULER or vice versa. The short answer to this question is, No. Both tests measure or predict different things hence, one should not replace the other if the user is trying to identify a particular quality or quantity. In this blog, we will be exploring the differences between these two tests, when they should be used and why.

Getting more details on RPVOT

RPVOT stands for Rotating Pressurized Vessel Oxidation Test as per ASTM D2272. This test is designed to be a performance test to measure the remaining test life of an in-service oil. The oil is stressed in a pressure vessel with water, copper catalyst, heat and pure oxygen. The test is “completed” when the pressure drops by a specified amount below the maximum pressure developed. The pressure drop is indicative of the base oil undergoing rapid oxidation and the completion of the test should indicate that the formulated and natural antioxidants have been fully depleted.

Interestingly enough, these parameters (rapid oxidation and depletion of antioxidants) are typically confirmed by the changes in the Acid Number and Viscosity tests. On the contrary, when this was investigated, it was found that there were little to no changes in Acid number or Viscosity which directly reflected oxidation of the lubricant. In most cases, the acid number remained the same as that of the new oil even though the oil had undergone significant oxidation.

The RPVOT test gives its results in the form of minutes which represent the total time for the oil to undergo “complete” oxidation. However, these minutes cannot be effectively translated to equipment hours as the conditions would vary drastically from those experienced in the lab. Additionally, there has been an issue reported regarding the reproducibility of these RPVOT results as per ASTM D2272. Sometimes, the RPVOT new oil value is considerably less than that of the in-service oil which can greatly confuse the user who would be planning their maintenance around these values.

On the other hand, RULER represents Remaining Useful Life Evaluation Routine. This test uses voltammetric techniques to determine the actual quantity of remaining antioxidants both the primary and secondary antioxidants. This is done as per ASTM D6810 and ASTM D6971. In this test, the oil sample is mixed with an electrolyte and a solvent. This is then placed in an electrolytic cell to detect the electrochemical or antioxidant activity. The electrolytic mixture helps to enhance the extraction of the antioxidants into the solvent phase.

The potential across the electrodes varies linearly with time and the resulting current is recorded as a function of the potential. As the voltage increases, the various additive species under investigation will oxidize electrochemically. This produces an anodic rise. The decreases in the electro-active species concentration at the electrode surface and the exponential increase in the oxidation rate lead to a maximum in the current potential curve known as the oxidation wave. This data is used to predict the remaining useful life or evaluate the remaining antioxidants.

A closer look at antioxidants

All turbine oils contain antioxidants. These additives are the first line of defense for the base oil against oxidation. Initially, formulators may have used only one type of antioxidant. However, with the evolution of formulations and base oils, formulators are now including two types of antioxidants (primary and secondary) to help these turbine oils combat oxidation. This is a very important factor when analyzing the performance of these lubricants as users should know the type of antioxidants which are being used for these oils. Here are some definitions which you may find useful.

Primary antioxidants remove the radicals which initiate the chain reaction that results in accelerated lubricant oxidation. Hindered aromatic amines and phenols are characteristic types of primary antioxidants. These are known as ashless antioxidants and go straight to preventing deposits from forming.

Secondary antioxidants react with peroxides and form non-reactive products which do not participate in further oxidation of the lubricant. Zinc dithiophosphates (ZDDP) belong to this type of antioxidant.

Mixed antioxidants systems occur with two or more antioxidants being added to the oil. In this synergistic mixture, one of the antioxidants sacrifices itself in preservation and regeneration of the other. An example is the synergy between amines and phenols whereby hindered phenols give excellent protection at low temperature regimes and deplete first while the amine antioxidants are more effective at the higher temperature ranges.

After the RPVOT has been performed, there is residual oil in the pressure vessel. As we read earlier, this test is completed by a particular drop in pressure which indicates that the oil has been completely oxidized. Therefore, we examined the residual oil from a number of samples after RPVOT was performed on them. The results were extremely interesting and contradicted the assumptions in the test.

All of the Mono antioxidant formulation Steam Turbine oils were examined first (26 samples). It was found that the RULER values showed a complete depletion of antioxidants for all of the residual samples which were examined. This proves that in the RPVOT test the drop in pressure did in fact indicate “completion” as the antioxidants were fully depleted. Additionally, these results also showed; high viscosity increase, high acid number increase and high FTIR Oxidation. These confirm the depletion of the antioxidants from these residual oils. 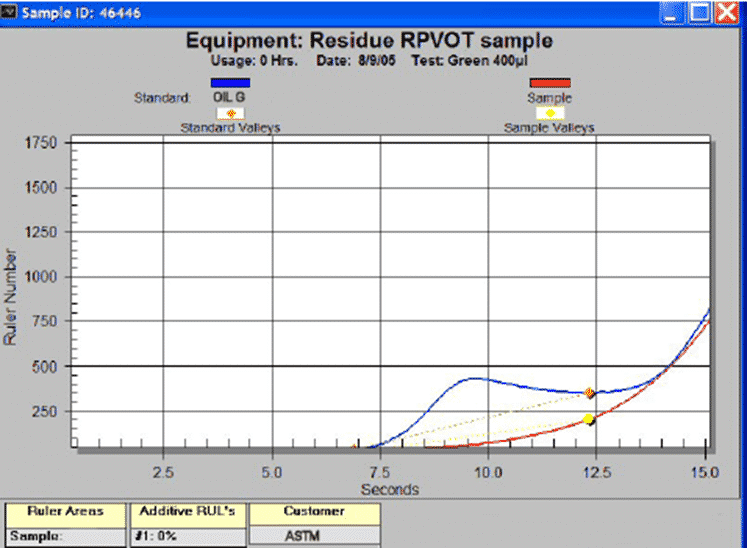 In these synergistic antioxidant formulated gas turbine oils, 32 samples of 3 types of oils were examined. Overall, it was found that the RULER test indicated the presence of aromatic amines whereas the phenolic types of antioxidants were depleted. In some cases, both types of antioxidants were present with the amines in a higher concentration than the amines. Additionally, there were also significantly lower increases of Acid Number and Oxidation in comparison to the samples with complete antioxidant depletion. In essence, this contradicts the RPVOT test whereby the residual sample has not completely oxidized. 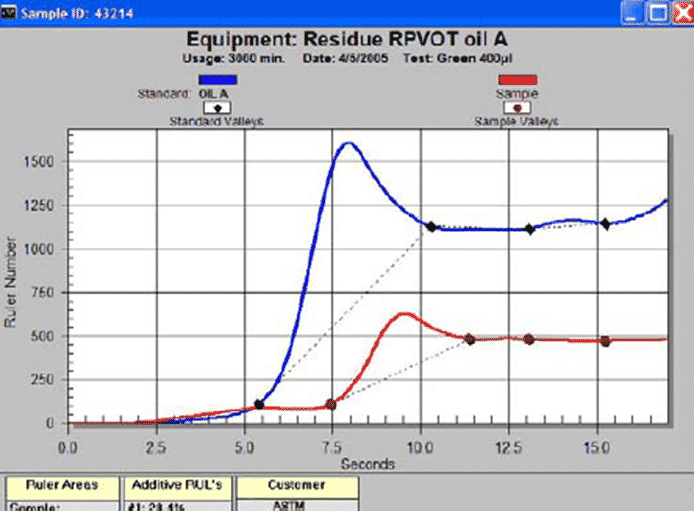