Helicopter engines undergo rapid changes in temperature and depending on where they’re flying can move from a moderately warm atmosphere to a colder one. Additionally, the actual engines can experience temperatures in excess of 140°C during operation or even 250°C when hot spots occur. These variances in temperature would impact on the lubricant and can typically cause accelerated degradation compared to regular land based engines. As such, when designing a sampling program to monitor the health of the lubricant, one should be aware of the operating conditions under which the lubricant has to perform.

One particular Helicopter engine OEM began noticing coking on their systems and decided to begin monitoring the levels of antioxidants in addition to their current monitoring program. Their current program included Spectrometric Oil Analysis for wear metals (usually smaller than 10µm) and the use of magnetic plugs. The magnetic particles in the oil system are retrieved via the plug and analyzed using a Scanning Electron Microscope. These magnetic particles are typically within the range of 40µm. With this combination of monitoring techniques, the OEM hoped to improve the availability and reliability of their helicopter engines.

When an oil sample is sent for Spectrometric Oil Analysis, this usually evaluates particles which are less than 10µm. Usually, the monitored wear metals include; iron, chrome and silver. These particles are characteristic of fine wear which typically occurs at the coupling box or seal, as well as the bearing skidding. Samples are generally taken every 100 hours. Based on years of experience, the OEM has condemning limits for these metals and once detected, they can determine specific maintenance actions before severe wear or mechanical failure occurs. However, the Spectrometric Oil Analysis has shown some limitations with more modern helicopter engines and filters with higher efficiencies and ratings.

On the other hand, the magnetic plug can retrieve particles larger than 40µm. Once particles are detected, the pilot is informed by a visual alarm and after they land, the particles are retrieved and sent to a lab for analysis. This is where they are analyzed by a Scanning Electron Microscope. The chemical composition of the particles are determined and the damaged component can be pinpointed. Any abnormal wear which is reported results in immediate maintenance action on the engine to prevent more severe wear or catastrophic damage.

Jet engine oils are subjected to increases in thrust / weight which can result in increased operating temperatures of internal engines. These engines also have lower oil consumption (less oil top up), so this adds on to the oxidative stress that the lubricant will face during its lifetime. Jet engine lubricants are comprised of polyolester based oil which contains antioxidants to help prevent its oxidation. Antioxidants can be primary or secondary in nature. Primary antioxidants such as phenols, aminophenols, aromatic amides react with free radicals to prevent polymerization. Aminic antioxidants are usually active at higher temperatures compared to phenolic antioxidants. Secondary antioxidants can include sulphurized phenols and phosphites. These eliminate hydroperoxides which oxidize to acids.

In jet engine oils, a synergistic combination of primary and secondary antioxidants are used to help protect the base oil from degradation. During the life of the jet engine fluid, the antioxidants will deplete until it reaches a crucial level where the fluid begins to degrade or polymerize at an accelerated rate. It is at this point that significant changes begin to occur in the base oil stock’s physical characteristics. This is usually called the end of the useful life of the oil. When estimating the Remaining Useful Life of an oil, it is therefore important to establish its critical antioxidant concentration. In the graph below, we can see the intersecting point of the depleted antioxidant levels and increasing viscosity and acid numbers. 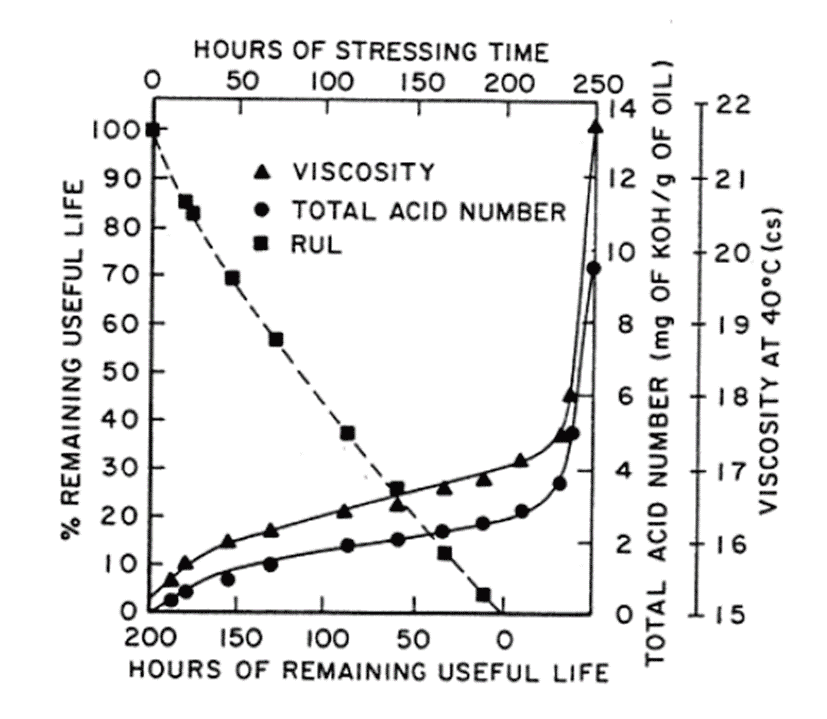 Putting RULER® to the test

The Helicopter Engine OEM estimates that only a relatively small amount of oil is faced with hot spots which can elevate to approximately 250°C. However, the average oil temperature in the engine (after the oil cooler) is approximately 90°C but can get to 140°C max. At these temperatures, the depletion of antioxidants will be gradual and not as abrupt as the tests below conducted at 150°C and 180°C. In these tests below, the oil was oxidized at 150°C and 180°C and the rate of antioxidant depletion as well as the Viscosity and TAN were measured. As we can see, there is a good correlation between RUL% results and the degree of oil oxidation as shown by the more traditional TAN increase test.  One should also note that there is a distinct difference in the depletion rate of aromatic amines (primary antioxidants) at the different temperatures. 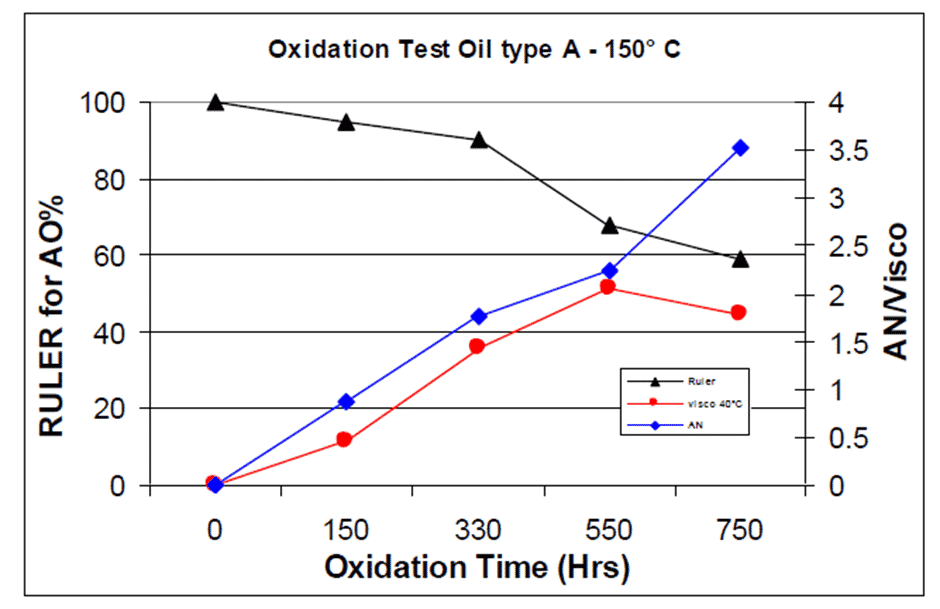 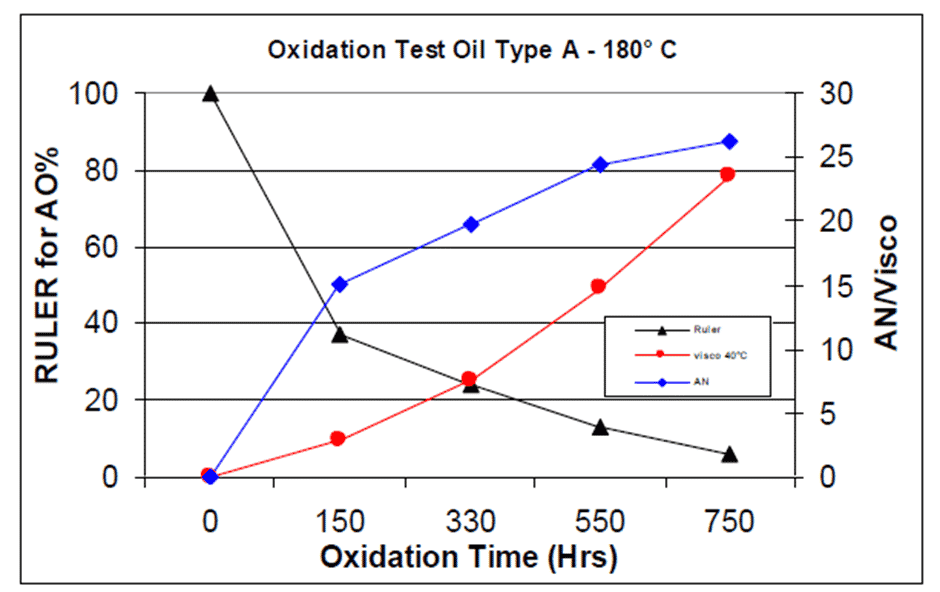 The oxidation method used was Defense Standard 05-50 part 61 Method 9 and involves both “Temperature Parameters – Oxidative Stability” as well as “Effective Life – Oxidation Stability”. The test results show that RUL% initially decreases in these samples with the increasing test temperature until a minimum of 200°C. TAN and Viscosity are also seen to rise significantly after 200°C which indicate severe oxidation of the oil. In fact, most of the parameters reach their crucial limits between the temperature range of 195 – 200°C. When the oil reaches 20% RUL%, the antioxidant becomes ineffective which leaves the base oil open for degradation.

A RULER trend curve was defined for the helicopter engines tested as shown in figure 4 below. Here, we can see that the RUL% fluctuates between 90-100% during the first 750 operating hours. Afterwards, the RUL% data shows a different depletion pattern. One of the reasons behind this change could be as a result of change in operating conditions or the build-up of oxidation products which affect the efficiency of the antioxidants. 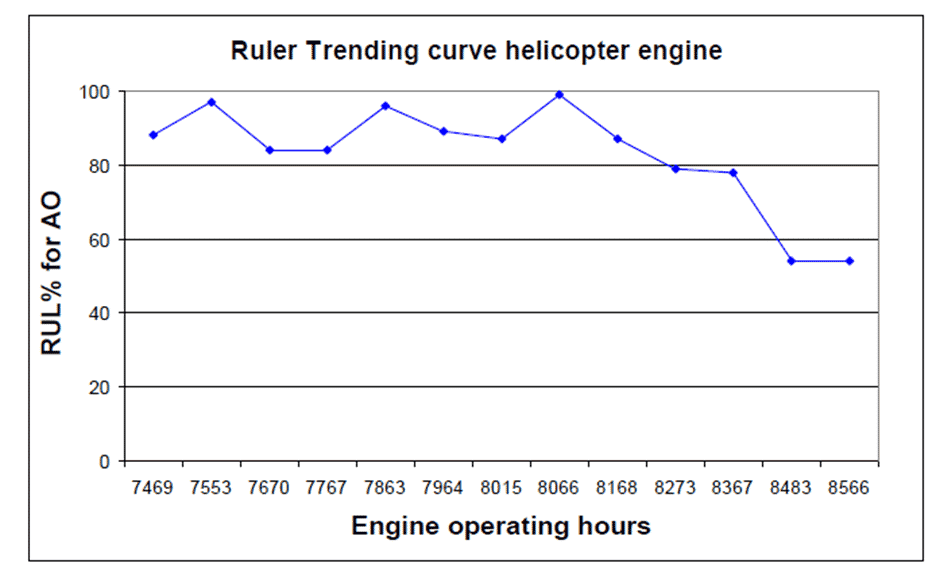 The OEM realized that through the RULER®, they were better able to differentiate the type of helicopter engines, operating conditions and even the type of jet engine oil (High Thermal Stability jet engine oils Type III vs Type II). Additionally, they were now able to more accurately predict the correct oil change intervals. The quality of replenishment is now directly proportional to the degradation of the antioxidants and their stabilization concentration (RUL%). It was also found that when the oil flow begins to reduce or the oil comes into contact with hot air or hot spots, the antioxidant levels decrease rapidly under 50% RUL%. This is critical to recognize as corrective actions can be carried out and this can also detect abnormal operating engines.

From these results, it was established that for normal operating engines, trend analysis will show normal depletion and with regular top up of fresh oil, antioxidants will remain above the 60% RUL%. However, for engines which are suffering from operating problems, the level of remaining antioxidants can decrease so rapidly that it may be a wise decision to change out the oil after every 100 operating hours.

It was also recommended that regular sampling at 50 hours would enable operators to establish a trend analysis of the antioxidants. This would indicate when the minimum level of 60% is achieved in complement to the Spectrometric Oil Analysis and Magnetic Plug programs which already exist. The combination of these programs can determine the correct oil replacement interval as well as identify operating engines with abnormal working conditions which can consistently reduce wear and damage costs on the helicopter gas turbine engines.