Are Phosphate Esters Susceptible to Varnish?

Are Phosphate Esters Susceptible to Varnish?

Phosphate esters are one of the most popular fire resistant fluids and are used almost extensively in Electro-hydraulic systems (EHC). Like most fluids, it can be prone to failure but does this include varnish? Before we answer that question, let’s explore some of the ways in which a phosphate ester can fail and the effects of these failures on the systems in which they are being used.

*Presence of water – phosphate esters have an affinity to water and can decompose in the presence of elevated moisture. This usually creates acids and alcohols. The alcohols can further oxidize and create varnish.

*Low resistivity causing electro-kinetic etching – valve erosion can be caused by phosphate esters with low resistivity. Generally, contaminants and fluid degradation can cause the resistivity to drop.

*Microdieseling or extreme thermal degradation – in cases of extremely high temperatures, phosphate esters can form dark sub-micron particles. After some time, these particles can contribute to valve silting and an increase in the frequency of filter changes.

While these are some of the modes of failure for phosphate esters, we need to take a deeper dive into how these modes can contribute to varnish and more importantly how we can detect its presence.

Unfortunately, during this oxidation process, the acid number does not increase. Therefore, users performing oil analysis using the Acid number test as their parameter for detecting the presence of oxidation would not be able to detect it! They will see the fluid as being in the normal ranges when oxidation is occurring.

For phosphate esters, it is critical to monitor the presence and depletion of these alkyl phenols. One tool which can be easily used is RULER (Remaining Useful Life Evaluation Routine) which utilizes Linear Sweep Voltammetry. This measures the presence of antioxidants in the fluid being analysed as shown in the figure below.

For this EHC fluid, it appeared to be in good condition with the following values:

However, after the RULER test was performed, it returned a very high level of phenols present in the Phosphate ester. While high antioxidants for regular fluids are considered a good lubricant health, this is not the same for the presence of these phenols in phosphate esters. Here’s a look at what the RULER curve looked like for this fluid. 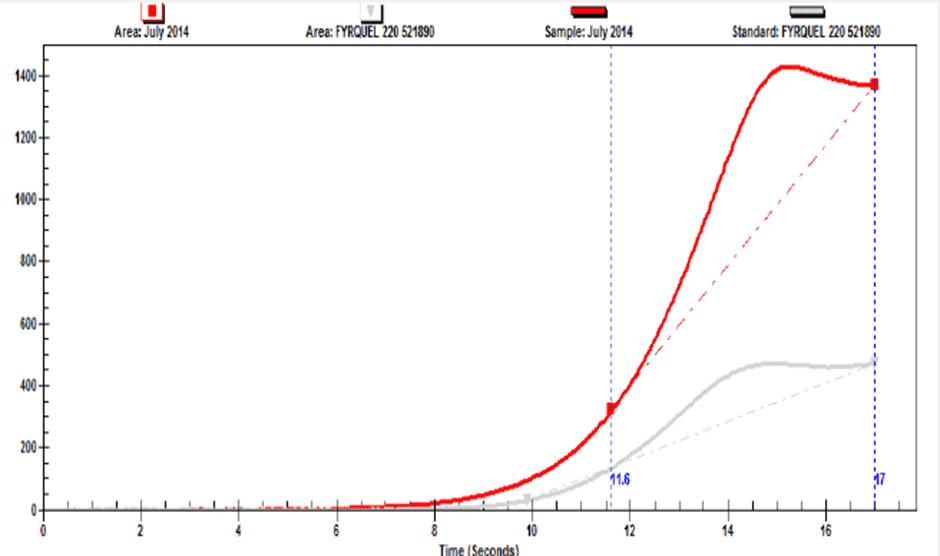 Elevated level of phenolic alcohols measured by the RULER.

Phosphate Esters are not regular oils!

Phosphate esters should not be treated like regular mineral oils. Their properties are different and as seen from the case study above, their results are interpreted differently for particular tests such as the RULER.

When evaluating the condition of these types of fluids, one must remember its affinity for water and its modes of degradation. It is through this affinity that they produce alkyl phenols. The presence of these in high quantities can indicate the onset of oxidation. This is an indicating factor that the oil is undergoing some form of oxidation or degradation.

For regular mineral oils, analysts typically look for a depletion of antioxidants to detect the ongoing process of oxidation unlike phosphate esters which look for an increase in the presence of alkyl phenols. MPC value interpretation remains the same despite the type of fluid being analyzed. Overall, we can detect the presence of varnish in Phosphate esters through oil analysis but we must be wary of the parameters being tested and be able to interpret them accordingly.