A Closer Look at Varnish

A Closer Look at Varnish

Varnish is one of the most used words within the industry although it can exist in many varying forms. Degradation products have very complex compositions and unique physical characteristics. Not all forms of varnish are created equally but most of the issues surrounding varnish remain the same. Typically, the presence of varnish is evidenced by valves sticking, blocked lines, fouled filters and of course the decrease in bearing clearances which usually leads to reliability problems. While the issues surrounding varnish are similar, the types of oil and equipment conditions have changed over the years.

The role of the OEM in varnish

Technology is always advancing and with it equipment must be upgraded as well. Most pieces of equipment are now built to be smaller, faster and more efficient. These changes usually affect the lubricant as it now adds more stress on the lubricant. Consequently, oils should be able to withstand higher temperatures for longer periods while in the presence of more contaminants in smaller spaces. As such, oil manufacturers are now tasked with engineering oils to combat these additional factors as well as provide their regular functions. One solution they have turned to is using more highly refined base oils.

The chemistry behind degradation

Over the last decade or so, there has been a global switch to more refined base oils for use in producing finished lubricants. Essentially, there has been a shift away from Group I base oils towards the Group IIs, IIIs and synthetic Group IVs and Vs. There are significant differences in the chemical characteristics of the Group I base oils compared to the others. Initially, these were the least expensive to produce as they required less refining. They were also higher in solvency, so varnish could remain in solution for longer periods.

Given that finished lubricants now have to accommodate for the additional stresses of evolving equipment, manufacturers have looked to more refined base oils to achieve these demands. With changing formulations and more highly refined base stocks, the requirements of the OEM could be achieved but this also meant that deposits which were previously held in solution (with the Group I base oils) may no longer be able to do so. The table below gives an overview of the varying types of base oils and the main differences.

Group I base stocks are manufactured by solvent extraction. These are more polar in nature due to their remaining contaminants. Since it is polar, it has a higher solvency than paraffinic base stocks. Additionally, they also have a higher oxidative stability compared to the other base stocks.

Group II base stocks are manufactured using a process called hydrocracking and solvent or catalytic dewaxing. These fully formulated Group II lubricants have superior antioxidant properties since virtually all the hydrocarbon molecules are saturated. One of the obvious setbacks with this group of base stocks is its reduced capacity to keep oil degradation products in suspension.

Group III base stocks are manufactured by a special process called isohydromerization or severe hydrocracking. These base stocks are extremely non-polar and often require the addition of an ester or aromatic compound to increase their solvency to hold additives in solution. Interestingly, this particular group has the lowest natural oxidative stability; however, the full formulated lubricants have the highest oxidative stability.

Groups IV & V are fully synthetic oils and among the highest costs. Typically, these are not used as frequently in the mainstream for turbine oils, so they have been excluded in this blog.

With the use of these newly formulated lubricants, the degradation patterns have also changed. In the past (with the Group I mineral oils), degradation occurred in a linear fashion. As such, it was easier to predict when a lubricant began failing. However, the new lubricants have been found to last longer, perform better but fail at a faster rate. This is where varnish becomes known through the deposits which are formed.

Varnish and sludge are sometimes used interchangeably but their appearance is what sets them apart. Although the chemical composition of varnish is quite varied (as noted earlier), one of its characteristics is that it has a more cured, shiny glean which is not easily wiped away. On the other hand, sludge is considered to be wipeable, gooey and containing moisture. Varnish is primarily caused by the continual process of oxidation which results in the loss of an electron to one of the molecules in the lubricant.

In the figure below, there is some sludge at the bottom of the reservoir. This is where the return oil line is and it disperses the sludge. There are some more tenacious deposits at the fluid level which are usually referred to as “bathtub rings”. These are more difficult to remove even though the chemistry of sludge is similar. 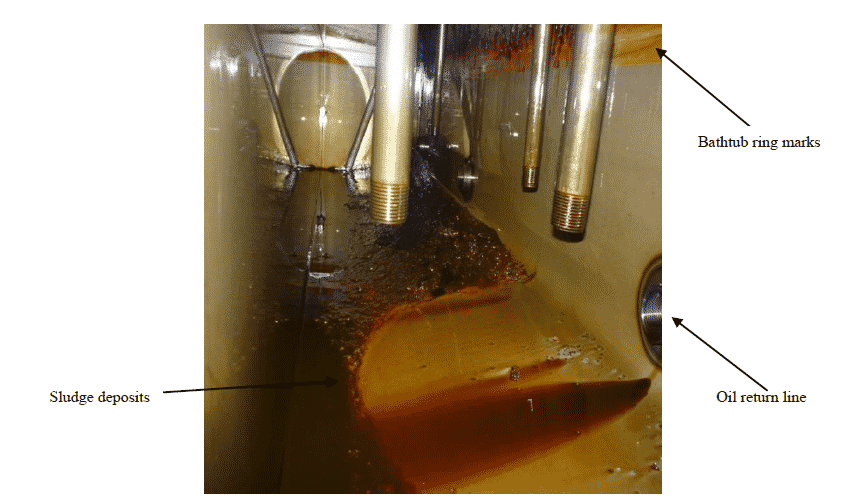 Figure 1: The formation of both sludge and varnish in a hydraulic oil reservoir

As we know, everything is susceptible to oxidation (even apples!) as this is the degradation of an object in the presence of oxygen. However, antioxidants are usually added to lubricants as these are a more reactive species than base oil. This allows antioxidants to be sacrificial in nature and react with oxygen to protect the base oil. As such, the presence of antioxidants in finished lubricants are critical especially for turbine and hydraulic oils which often have the highest amount of oxidation due to their smaller clearances and elevated temperatures.

Oxidation is not the only form of degradation. Another common form of degradation is hydrolysis. This occurs when water reacts with the oil. Yet another form of degradation is thermal degradation where the oil undergoes degradation rapidly in the absence of oxygen. Additionally, incompatible contaminants such as different additive formulations or base oils can react to form precipitates, gels and deposits. One example is the reaction of ester based oils with mineral oils, these produce deposits as they react negatively. Moreover, acidic rust inhibitors are incompatible with basic rust inhibitors which can create flocculants upon mixing. As such, it is essential to understand the type of deposit before we derive a solution for its removal. 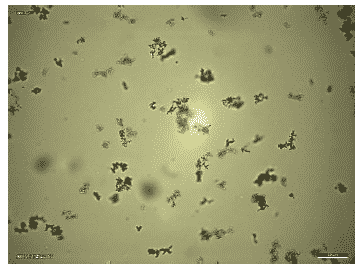 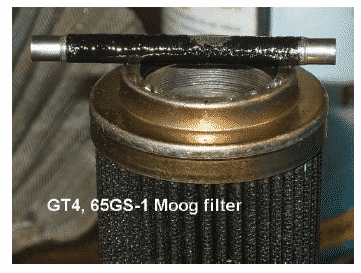 Here is an image of the formation of significant deposits on the heating elements inside the reservoir. This was taken from a high wattage heater which contributed to rapid oil degradation and encouraged deposit formation. 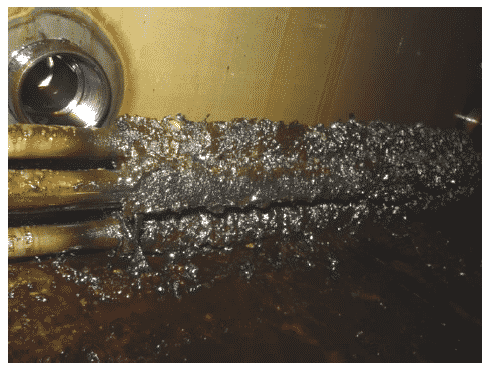 Figure 4: Significant deposits on a heating element due to extreme temperatures

Oxidation can be described as the initiating process of varnish formation. At the point of oxidation, the soluble oxidation products will condense, agglomerate and polymerize together to form higher molecular weight objects referred to as oligomers. Eventually, these oligomers will reach the saturation point of the fluid depending on their concentration, chemistry, temperature and flow conditions. Once the saturation point has been reached, the contaminants will precipitate out and form insoluble particles.

These particles are also called soft contaminants and have a median size of approximately 0.08 microns. These soft contaminants are polar and are attracted to each other in the non-polar environment of lubricating oils. Depending on the flow conditions of the fluid, agglomerates of soft contaminants will eventually find a place to settle out and create varnish deposits. These predominantly settle on polar surfaces such as metal parts. If there is stagnant oil in certain sections of the oil system due to discontinuous operation then a higher rate of sludge or varnish precipitation will take place. 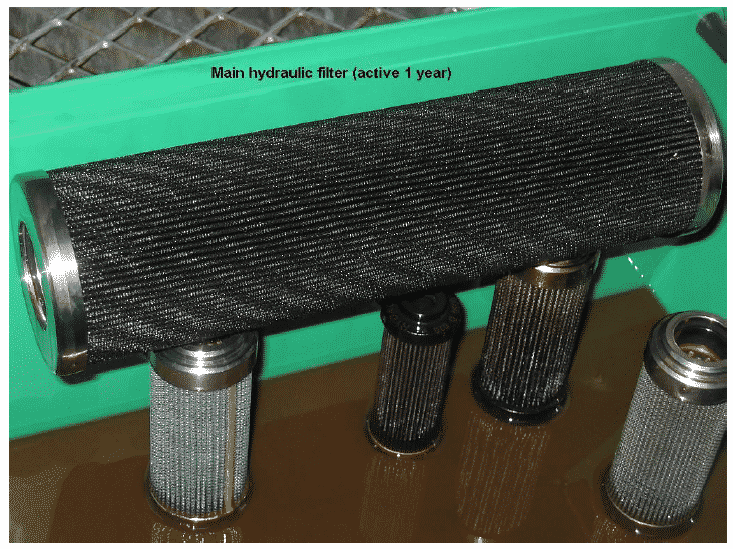 While lubricants have been formulated with antioxidants to combat against oxidation, it can still occur due to the nature of the environment and the formulation of the lubricants. It is essential we recognize that varnish exists in varying forms and chemistries. Only when we fully understand its properties and characteristics can we then attempt to eradicate it from the system.