How to Monitor and Maintain Phosphate Ester Fluids 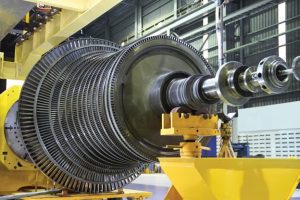 How to Monitor and Maintain Phosphate Ester Fluids

Phosphate ester fluids have been used to control thousands of steam turbines over the last 60 years. With this much user experience, one would assume that their operational challenges would be well-understood and that power plants would be able to maintain the quality of these fluids with ease. On the contrary, phosphate ester fluids are often the Achilles’ heel of most lubrication programs.

Hydrolysis is the most common source of degradation in phosphate esters. High operating temperatures, intermittent steam leaks and the hygroscopic nature of the fluids provide an ideal environment that favors hydrolysis reactions. The saturation limit of phosphate esters at operating temperature is approximately 3,000 to 5,000 parts per million (ppm) of water. During hydrolysis, the fluid produces a stronger and a weaker acid. The stronger acid undergoes a series of reactions, forming subsequent phosphoric acid derivatives and alkylphenols.

Temperature, water and fluid are the three principal parameters controlling hydrolysis reactions, with the consumption of water the limiting factor. These reactions are autocatalytic and initiate at lower prolonged temperatures of 100 to 120 degrees C. Therefore, it is recommended to maintain water content of less than 500 ppm and acid numbers below 0.2 milligrams of potassium hydroxide per gram (mg KOH/g).

Figure 3. Metal soap formation due to the
leaching of metals from traditional acid-scavenging
media reacting with acids

Microdieseling involves compression of an entrained air bubble as it passes through a high‐pressure pump. Upon collapsing, the air bubble releases a high amount of thermal energy, which causes high temperatures in the range of 800 to 1,000 degrees C. These temperatures break down the phosphate ester fluid into its constituent molecules and lead to fluid darkening. In some cases, microdieseling may result in the formation of soot and incomplete combustion products.

Soot particles are carbonaceous, black and submicron in size. They may remain in suspension or form deposits and varnish in the system internals. These particles have the potential to clog servo valves, thus causing severe reliability issues. The presence of soot particles impacts the performance of the acid-scavenging media and the fluid’s resistivity as well. For this reason, it is crucial to monitor the color of the fluid.

EHC system users frequently employ traditional acid-scavenging media technology such as fuller’s earth for faster acid removal. This technology leaches various metals like aluminum, silicon, calcium, sodium and magnesium. Therefore, it is important to monitor the fluid’s elemental analysis. The leached metals react with acids in the fluid to form soaps, as shown in Figure 3.

Metal soaps may be alkaline or neutral. They generally are insoluble but may dissolve in the fluid based on its condition. When produced, these soaps tend to precipitate and form deposits in the system. They also affect the fluid’s resistivity and other performance properties.

Systems using fuller’s earth often see a decrease in resistivity upon initial application of ion-exchange technology. The reduced resistivity is due to the removal of metals from the system. Deploying modern acid-scavenging media technology, such as ion-exchange resins, can eliminate existing leached metals and avoid further leaching of metals in the fluid. 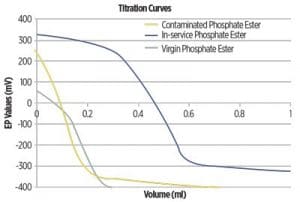 The acid number test (ASTM D974) is commonly used to measure the acid number of in‐service fluids. In this colorimetric test, a color change determines the endpoint, making the measurement difficult for darker samples. Also, this method only measures stronger acids and not carboxylic acids (organic varnish) or weaker acids (alkylphenols). The ASTM D664 test, which measures a broader range of acids and provides a total acid number (TAN), is recommended instead. In addition to measuring all types of acids, this test method is not influenced by fluid color, reducing the number of errors. The D664 apparatus is also automatic, which eradicates any bias due to the operator as compared to the D974 test. An acid titration curve, as generated by the D664 test method, is shown in Figure 4.

Liner sweep voltammetry is widely used to monitor antioxidants for turbine oils, as per ASTM D6971 (RULER). A linear sweep is applied to fluid samples in an electrolytic cell, resulting in a voltammogram. Similarly, this test method can be utilized for monitoring alkylphenols generated during hydrolysis and thermal degradation. For turbine oils, this method shows the consumption of antioxidants, but for phosphate esters, it can reveal an increase in contaminants generated by fluid degradation. Linear sweep voltammetry is very sensitive to alkylphenols and measures below 100 ppm. Therefore, it is the preferred method for checking the hydrolysis and condensation reactions in phosphate ester fluid.

The power generation industry routinely uses membrane patch colorimetry (MPC) for measuring varnish potential. A similar method is applied to phosphate ester fluid as well. The method involves mixing 50 milliliters of sample with 50 milliliters of solvent. After mixing, the fluid mixture passes through the cellulose-ester patch. Measuring the color on the patch surface yields a “delta E” value. The higher the color, the higher the varnish potential.

Observing the color on an MPC patch can provide even more information about the fluid. For example, a black patch may be indicative of soot formation in the system. A dark brown patch may reveal incomplete combustion products formed at very high temperatures, while a green patch may indicate leaching of copper.

More information can be gathered from an MPC patch by merely performing the test with a low sample volume and rinsing the patch with a polar solvent. The presence of soot or organic varnish may then be identified under a microscope. 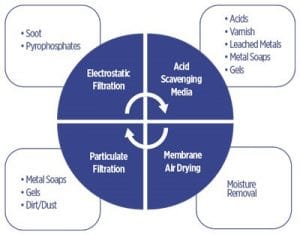 Table 1 shows recommended action limits for monitoring phosphate ester fluids. Proactively managing the fluids can help reduce the cost to maintain them in the long term and extend the life of the machine. Additional tests, such as viscosity, chlorides, particle count, air release and foaming, can provide further insight into the health of the fluid and the system. 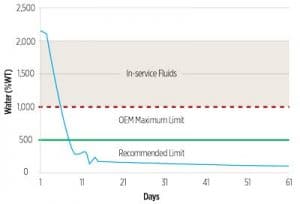 Figure 6. A reduction in moisture
content is shown after application of
an air-membrane dryer.

Different media combinations have shown varying rates of acid removal and acid saturation, depending on the condition of the phosphate ester fluid. Some media remove only stronger acids, while others eliminate mostly weaker acids. Therefore, it is essential to use customized media blends. Acid titration curves can serve as a useful tool in assessing the performance of the media by identifying the nature of the acids, adsorption and acid saturation.

An air-membrane dryer sweeps dry air across the headspace of an EHC reservoir. The dry air lowers the moisture content of the fluid via mass transfer. Air-membrane dryers can be effective for maintaining low moisture levels in the field and may be less expensive and maintenance-intensive than vacuum dehydration systems.

You now should have a better understanding of the most significant problems users face in managing phosphate ester fluids and why standard oil analysis tests may not always identify certain issues. This information should also provide a roadmap for testing the condition of phosphate esters as well as recommended actions to help ensure years of trouble-free performance.

For more insights or information, please contact an expert here.