How Should Rotating Equipment Lube Oils in the Ammonia & Nitric Acid Industry be Managed? 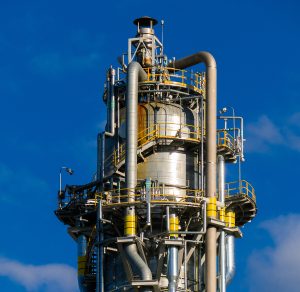 How should Rotating Equipment Lube Oils in the Ammonia & Nitric Acid Industry be managed?

Varnish in the fertilizer industry!

Do you work in the fertilizer industry? If you do, then you know how critical it is for your compressors to be fully functional! Typically, we’ve seen compression gases such as ammonia, nitrogen, carbon dioxide, oxygen or even nitrogen migrate through the seals and find their way into the lube system! The effects are usually disastrous! Additionally, there has been the demand for compressors to be more compact and efficient. This results in higher thermal and mechanical stress on the lubricant as it has to perform at higher temperatures in small capacity systems for longer periods of time and in the presence of contaminants!

With these new demands, oil suppliers have had to reformulate their products to suit these harsher environments. This saw the change from predominantly Group I base oils to Groups II and III for these types of products over the last two decades. Groups II & III base oils have better oxidative stability however, Group II base oils have a reduced solubility. Thus, when varnish or deposits form in the oil they do not stay in solution and begin to plate out into the equipment. This is one of the main reasons that we’ve seen so much varnish within the fertilizer industry over those years. We therefore need a “solution” or rather a product to keep those deposits in solution!

Impacts of varnish on Rotating Equipment, Bearings and Control Valves

Rotating equipment usually requires a hydrodynamic film of lubrication at all times. This simply means that the lubricant film must form a barrier between the two surfaces at all times. Usually, when there is an ingress of gas (especially in these fertilizer plants), the compressor oils degrade and this can interact with the surfaces (babbits) to form deposits. 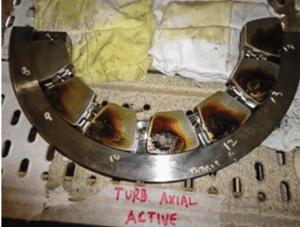 On the other hand, bearings usually see temperature excursions and increased wear. When varnish is formed it disrupts the hydrodynamic film. Since varnish is also an insulator, it traps the heat and raises the temperatures in the bearing. There are times when the varnish is removed due to the force of the rotor but in these cases, the varnish may remove some of the metal surface causing it to be exposed. This coupled with areas of mixed lubrication can lead to increased wear.

Control valves have very close clearances, thus any deposit that gets lodged can cause challenges. As such, control valves that have varnish present typically start sticking. More energy is required to move these valves and in some cases, there is also a build-up of static friction. Most personnel opt to change the control valve in hopes that it will stop the varnish build-up however, this just alleviates the situation for some time and the varnish continues to build-up. The real solution is having a deposit free lubricant and there is one solution that keeps the lubricant in that condition.

As we discussed above, the main challenge within the fertilizer industry is the adherence of deposits to the insides of the equipment, that’s when the problems begin! However, if there was a way to keep the deposits in solution, so that they do not stick to the equipment then we would not have control valves that stick or bearings that fail. One such method is the use of a solubility enhancer.

Fluitec has developed Solvancer® Technology (patent pending), the main component of DECON which can be added to lube systems and essentially keep those deposits in solution. We specifically paid attention to polarity, hydrogen bonding and dispersive forces when developing Solvancer®. These ensure that the lube oil deposits are quickly dissolved back into the lubricant and they do not fall out of the solution. Typically, this is used at a 3-5% treat rate to the lubricant and can all be done while in service, so there is no downtime!

It sounds like DECON should be used in all systems, all the time however, there are guidelines that should be followed before establishing whether a solubility enhancer is right for your system or not. Here’s a look at those guidelines:

Now that we know the conditions that should exist let’s take a look at the condition monitoring technologies that we need to understand what’s happening in our compressor lubricants! 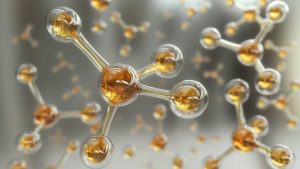 When varnish forms on any surface, it acts as an insulator trapping heat. As the layer of deposit increases in height, the temperatures also see an increase as more heat becomes trapped due to the varnish. However, as the rotor turns and when this force becomes strong enough, it can remove the built up varnish causing a drastic decrease in temperature. The area from which the varnish was removed now becomes a new surface for varnish to deposit and as it deposits, the temperatures start to see an increase again as shown in figure 1. This is usually reflected by a saw tooth pattern (figures 2 & 3).

Figure 1: Illustration suggesting the impact that varnish deposits have on bearing temperatures and rotor position. 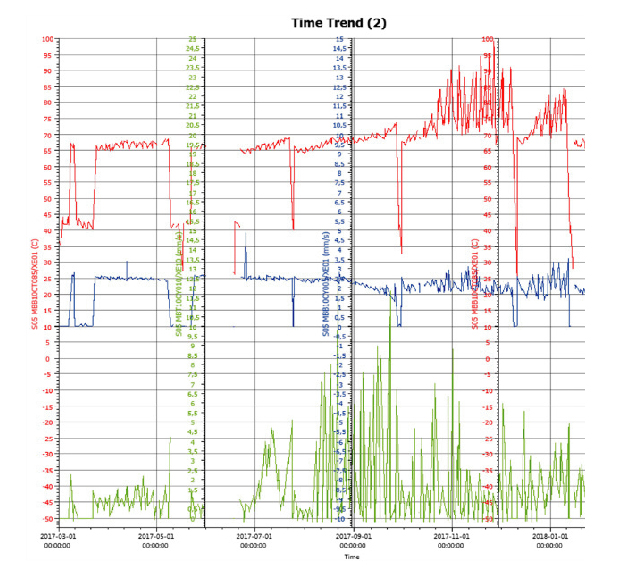 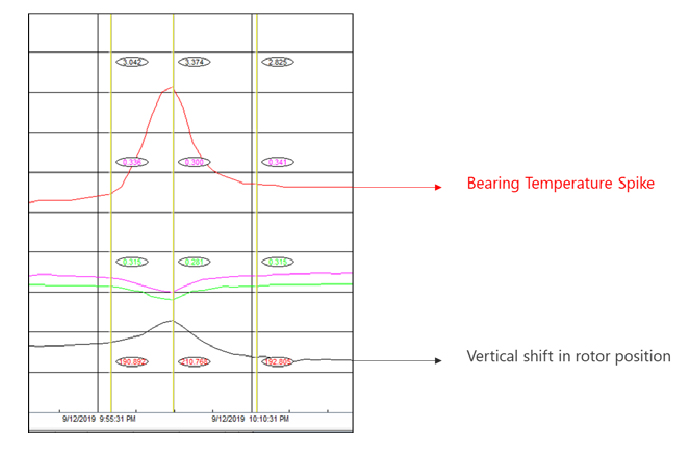 While we’ve talked about the relation between temperature, vibration and deposits we have not yet talked about the types of tests that should be performed to detect these deposits! What we did talk about was the move from Group I base oils to Groups II & III base oils. This actually changes the effectiveness of the tests conducted.

Since Groups II & III have a lower natural oxidative stability compared to Group I base oils, their degradation is no longer linear. When the antioxidants degrade, the actual base oil fails rapidly due to its inability to resist further degradation. Therefore, a greater emphasis needs to be placed on monitoring the health of the antioxidants. One way to do this is by using the RULER (Remaining Useful Life Evaluation Routine) test which is specifically engineered to measure and trend individual antioxidants without being influenced by other additive components.

We must remember that the first forms of degradation usually leads to the production of extremely small, sub-micron products. The presence of these can be verified through the use of MPC (Membrane Patch Calorimetry, ASTM D7843) testing. In this test, the colour of the patch is usually analysed and rated as per a colour scale.

A couple of other tests that can be of value include:

The correct oil sampling frequency must be observed with these tests to be able to establish the necessary trends. Typically, most compressors utilize a sampling frequency of 3 months but this is ideally a function of the condition of the oil. The interval may be shortened as the oil starts to degrade to allow for closer monitoring of the oil and enough time to resolve any issues that arise.

It must be noted that the traditional tests such as viscosity, elemental, spectroscopy, acid number, particle count and water will still provide value in trending the actual condition of the oil. However, it must be noted that the polar products formed during lubricant degradation are less than one micron in size, causing them to be undetectable!

Remember, always assess your system and conditions before implementing oil analysis tests or solubility enhancers. All systems are not created equal and to achieve the maximum benefits, each system needs to be assessed before decisions are taken. 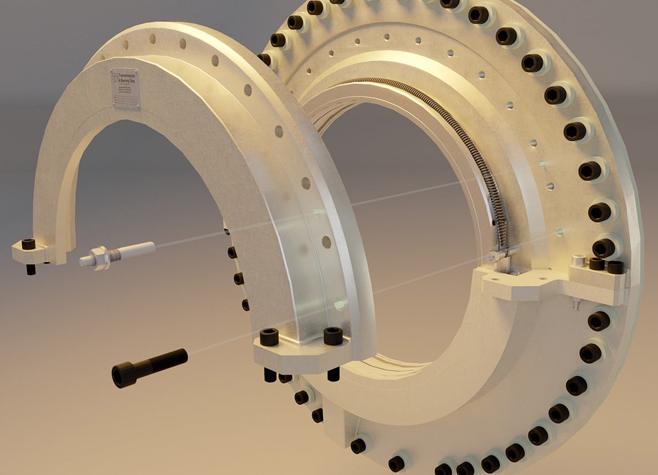