How Can I Control Contamination in My Lube System?

How Can I Control Contamination in My Lube System?

Contamination in any form affects lube systems. A contaminant can be classified as any piece of foreign material which exists in the system. While is a broad classification, it must be noted that not all foreign materials are reactive and may not cause harm to the lubricants. In fact, some contaminants can be easily removed or settle to the bottom of lube reservoirs over time. These do not have any negative effects on the lube system. On the other hand, there are those contaminants which can either become physically lodged in places they are not supposed to be or cause chemical reactions leading to negative effects on the lube system.

In this blog, we will be examining various ways of removing one of the most common contaminants, varnish. Essentially, varnish is unlike regular contaminants such as physical debris. Dirt and unwanted particles can be easily filtered using an appropriately sized filter. Subsequently, varnish can be removed from the system via two main methods; chemical filtration, utilizing a solubility enhancer or both. Both of these methods will be explored and appropriate applications of each will be discussed.

One of the downsides to flushing is the remnants of the chemicals which can stay in the system afterwards. This can accelerate the degradation of the oil and cause more challenges. This is where the process of Chemisorption works best. ESP (Electrophysical Separation Process™) technology relies on these principles. It can easily selectively remove oil degradation products which are in suspension or in solution without disturbing the fluid’s additive system. Its media can also be fully customized for each application and is selected based on the oil type and conditions present. 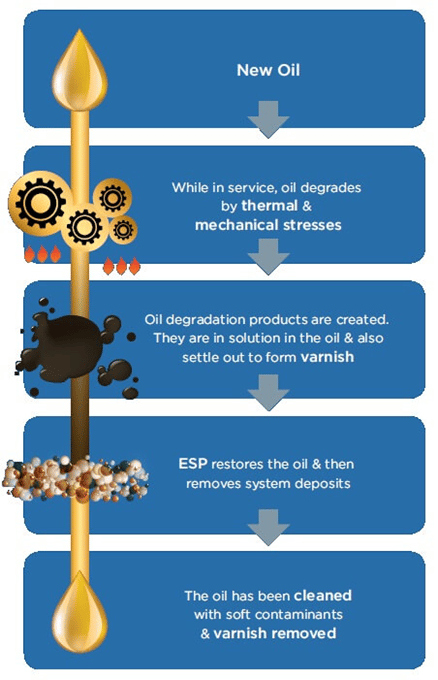 The VITA ESP system is very versatile as it can accommodate different types of filters depending on the application and condition of the oil with its multipurpose filter housing. Vita is the Latin word for Life as the VITA ESP will increase the life of your fluid by removing those varnish contaminants. The VITA ESP II can be used for reservoirs up to 3500 US gals (or 13,000 Liters) while the VITA ESP III is suited for larger reservoirs between 3500-8000 US gals (or 13,000- 30,000 Liters). 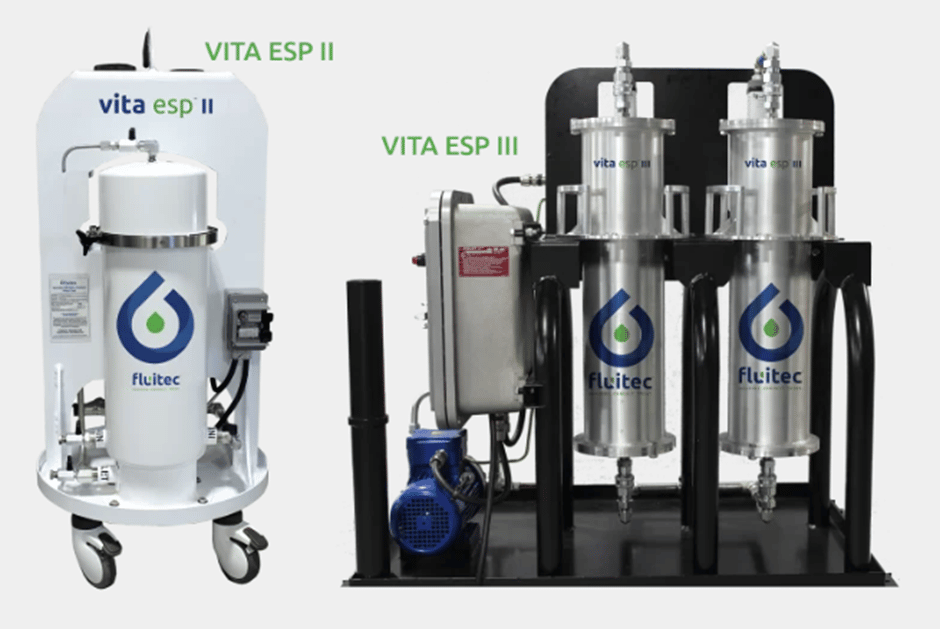 The VITA ESP system can utilize the Endure IX™ filter which is designed for removing acids from phosphate esters. This filter has the highest acid capacity that is 10x the performance of Fuller’s Earth and outperforms other IX filters by two times. These filters can be used in Power Plant EHC Systems, Phosphate Ester lubrication oil, Naval hydraulic equipment or Aircraft Hydraulic systems. 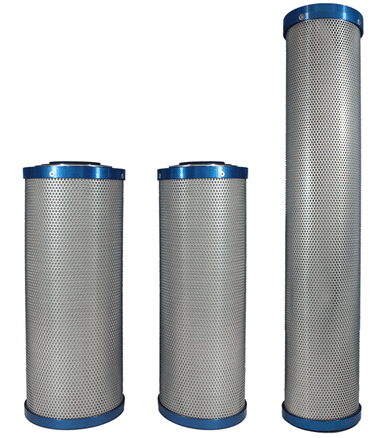 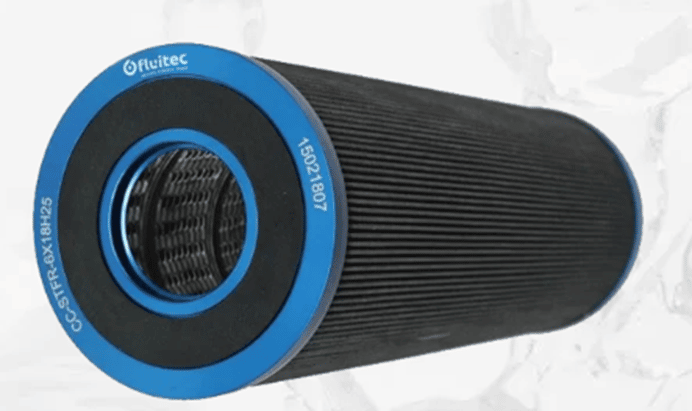 Another method of preventing contaminants from entering the system is through the use of a dry gas blanketing system. This is particularly important for Phosphate esters as they need to be kept clean and dry at all times. The Stealth EHC™ uses patented technology to remove moisture from phosphate esters by introducing a steady stream of clean, dry air in the reservoir. This enhances reservoir breathing systems by actively and continuously purging and dehydrating the reservoir headspace while removing water from the fluid. 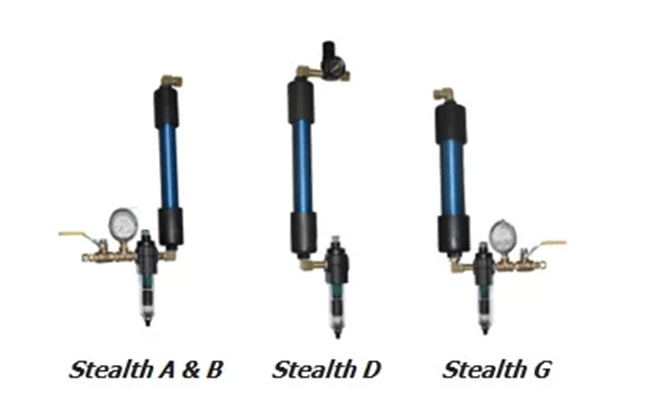 The other method of controlling contamination (in the form of varnish) is through the use of a solubility enhancer. As per the varnish lifecycle, even after varnish has been formed, it can be re-dissolved back into the oil. One such product is Solvancer® (a patent pending technology) which has been incorporated into several Fluitec products such as Boost, DECON and Infinity. It is a chemical solution to varnish engineered for non-detergent, API Group I-IV based lubricants. It is miscible in lubricants and does not interfere with the additive functionality.

Boost VR+ helps to improve the solubility of the in-service hydraulic oil. It promotes a cleaner, more cost-effective way of eliminating varnish and extending the life of the machinery. This is considered a risk free way to get rid of varnish and guarantees a safer, cleaner method for removing varnish. Boost VR+ removes the need for flushing, eliminating the use of potentially hazardous detergents or chemical flushes. It is fully compatible with all PAO based and mineral lubricants. As such, it is the product to be used to remove varnish contaminants from a lube system without the risk of chemicals which usually remain from chemical flushes. 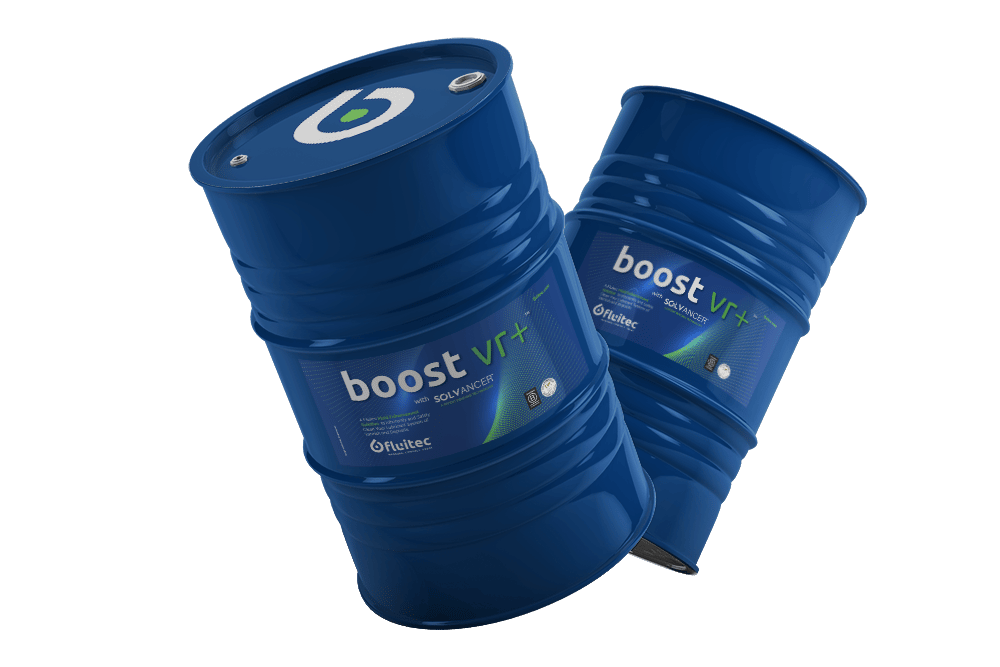 DECON is another solubility enhancer which has been integrated with Solvancer. It can quickly dissolve varnish and organic deposits from machine internals which will effectively decontaminate the material assets. This reduces the oil’s varnish potential and can offer long term protection against deposits and sludge. DECON does not leave any residue when it degrades which differentiates it from other hydraulic fluid chemical products.

DECON offers better seal compatibility than mineral oils. It can handle changes in mass, volume, strength and modulus better. Additionally, it provides no adverse impact on an oil’s demulsibility, air release or foam. It can effectively dissolve the agents which cause oil degradation without affecting the in-service oil’s chemistry or performance. DECON has been blended for various applications such as DECON AW (for hydraulic systems) and DECON AO (for systems which need an antioxidant replenishment). 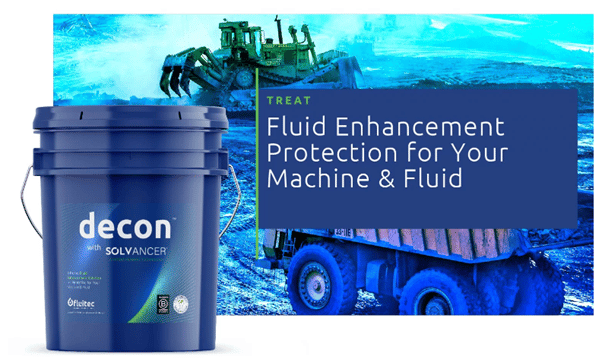 Contamination must be prevented in our systems. Regular filtration systems will remove hard particles or debris from a system but it will not remove varnish. Specialty products such as chemical filtration systems or solubility enhancers can help to prevent the agglomeration of varnish in lube systems and remove this contaminant. Essentially, when DECON or Boost VR+ is used in tandem with ESP VITA, systems can remain varnish free. Alternatively, these products are also designed to work as standalone products and can be used as such depending on the applications.