The Drive towards Lubricant Decarbonization

The Drive towards Lubricant Decarbonization

In December 2015 at the Paris Climate Conference (COP21), the Paris Agreement came to life. This agreement is the first ever universal, legally binding global climate change agreement and was adopted by consensus by all members of the United Nations Framework Convention on Climate Change (UNFCCC). The Paris agreement outlines the global framework to limit global warming well below 2°C.

Currently, 197 countries have agreed to work towards reaching net carbon neutrality by 2050. Ideally, this should keep the temperatures below 1.5°C by the year 2100. However, as per the Global Climate Action Tracker released in May 2021, the current policies estimate that the levels can increase to a maximum of 3.9°C with a minimum of 2.1°C. With the pledges and targets, it is hoped to achieve an average of 2.4°C as seen in Figure 1 below. 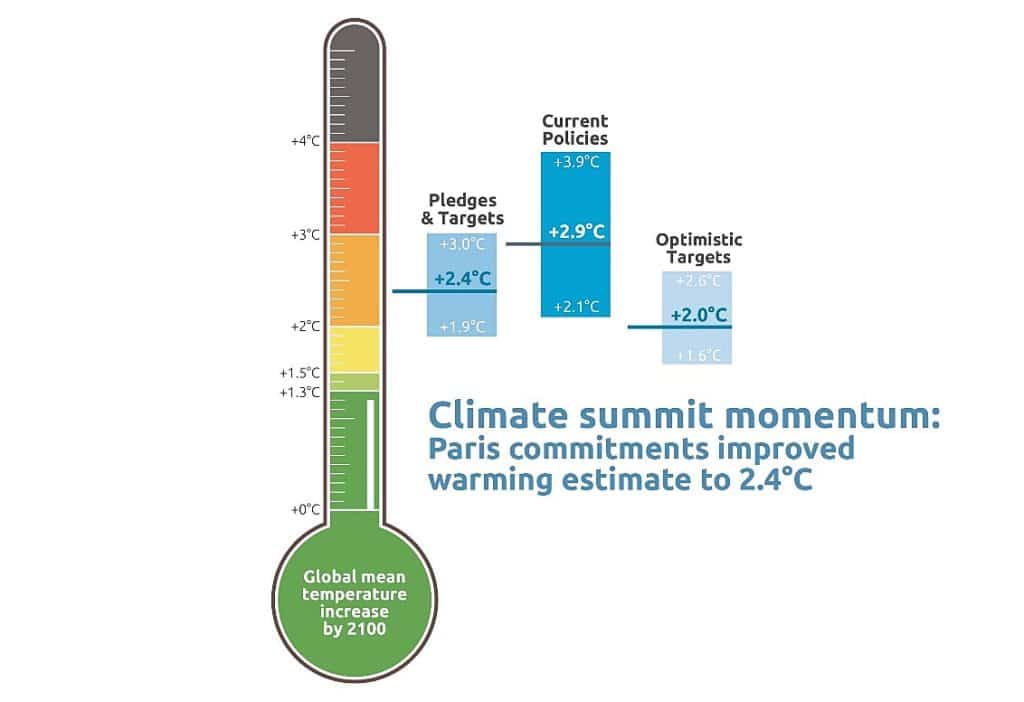 What can the difference of 1°C indicate? As per Vitra Global, the last time the global average temperature was to 2°C warmer, the average sea level was over 6 meters higher than today. Thus, with a 3°C rise cities such as Miami, Shanghai, Osaka or Rio do Janeiro could sink underwater. This can potentially force 275 million people worldwide to relocate to escape flooding. Figure 2 shows the impact of the Paris Agreement on the estimated global temperatures from the Global Climate Tracker.

Figure 2: Impact of the Paris Agreement on the estimated global temperature increase in 2100. Figure shows the estimates of the Climate Action Tracker from 2009-2021 for its “pledges and targets” and “current policies” scenarios.

What is the role of the Industrial sector in Decarbonization?

Decarbonization is the process of reducing greenhouse gas (GHG) emissions. The most important gases which contribute to the GHG effect are Carbon Dioxide (CO2), Methane (CH4), Nitrous Oxide (N2O) and fluorinated gases. In the United States, CO2 emissions represent over 80% of U.S. manufacturing energy related GHG emissions as per the United States Department of Energy. 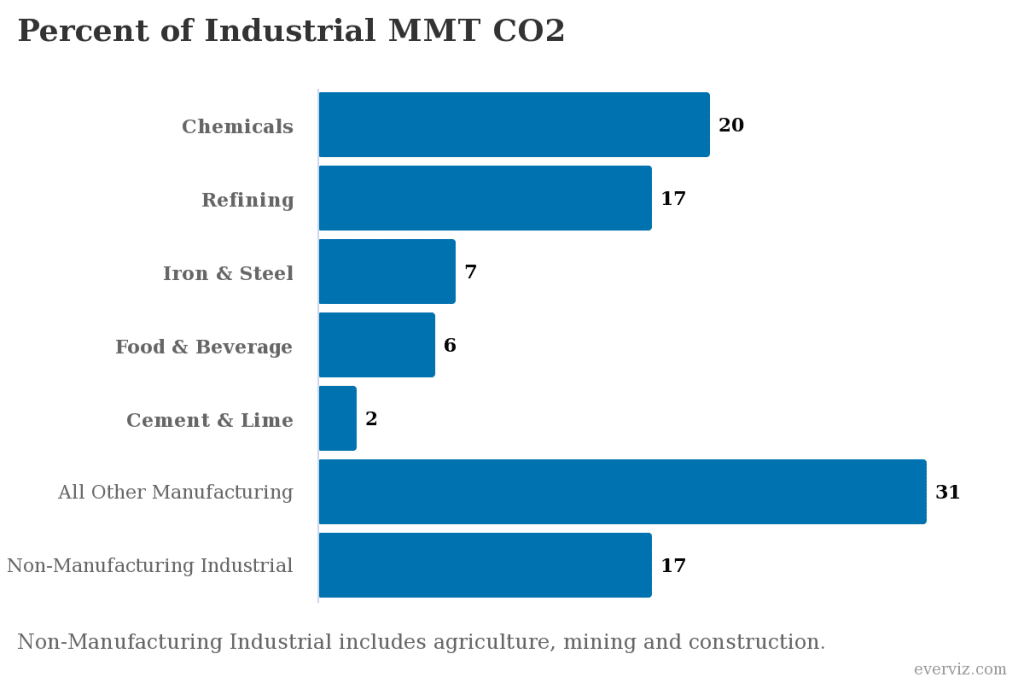 There are four key technological pillars which can significantly reduce emissions for the five subsectors identified above. These crosscutting decarbonization pillars are; Energy efficiency, Industrial Electrification, Low-Carbon Fuels, Feedstocks and Energy Sources (LCFFES) and Carbon Capture, utilization and storage (CCUS) as shown in figure 4 below. 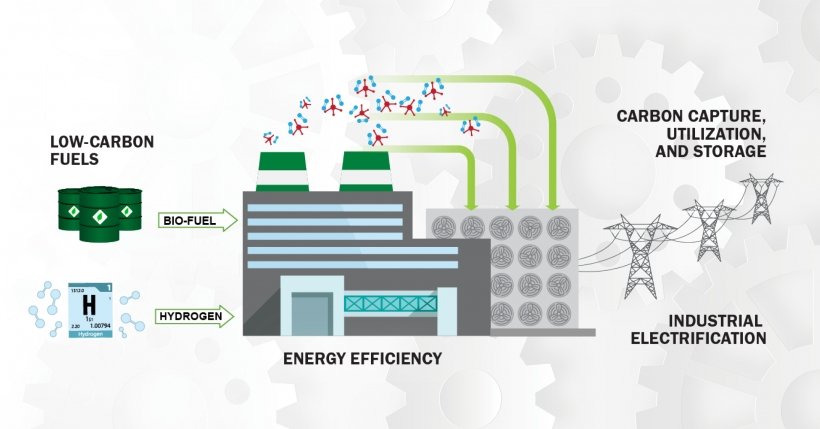 How can sustainable lubrication help?

Based on all of the information seen thus far, it can be concluded that the industrial sector accounts for a fair amount of GHG emissions. In most of these industries, lubricants are used in both small and large quantities. Lubrication can significantly impact the overall efficiency of a machine if the right lubricant is being used while performing its function of reducing the coefficient of friction. The lubricant can also affect the energy efficiency of the equipment. In most cases, particular types of lubricants have shown considerably reduced power consumption. As shown in figure 5, Industrial Energy consumption contributes to 33% according to the U.S. DOE’s R&D Roadmap.

Significant efforts are being made to increase the use of energy efficiency lubricants. Two roadblocks to widespread adoption include cost and the challenge of quantifying measurable improvements. Energy efficient lubricants typically cost more because they are made of tailored synthesized chemicals rather than straight hydrocarbon base oils. Generally, users are reluctant to purchase more expensive products unless there is demonstrable value.

One example is the use of multigrade hydraulic oils in industrial applications. Shear-stable polyalkylmethacrylate polymers are excellent viscosity index improvers and multiple studies have demonstrated energy efficiency gains of 5-15% compared to using monograde hydraulic oils. However, in most hydraulic applications, measuring these improvements is challenging without sophisticated equipment.

Another example exists in the turbine oil space. Mobil recently introduced a new turbine oil formulation that is 18cSt at 40oC rather than a standard ISO 32 VG which is 32cSt at 40oC. This was designed to meet GE’s new specification, GEK 121603. Mobil developed a mathematical model to measure efficiency improvements and then verified the measurements in test rigs and full-scale gas turbines. Compared to a standard ISO 32 VG formulation, the new formulation increases overall turbine efficiency by 0.09% due to reductions in bearing frictional energy loss. This small improvement in energy efficiency can translate to tens of thousands of dollars of fuel savings and a reduction of over 400 tons of CO2e annually. Measuring these energy efficiency improvements in the field remains a challenge but bearing and lube oil drain temperatures reductions at similar load and ambient conditions can confirm these improvements.

Each of these practices allows accurate measurement of the environmental benefit using Life Cycle Assessment (LCA). Although LCA is a well-documented practice as defined in ISO 14040, there are still areas interpretation in performing LCAs on lubricants. To provide more clarity on performing LCAs, the American Petroleum Institute (API) is creating a technical report entitled, “Lubricants Life Cycle Assessment and Carbon Footprinting – Methodology and Best Practice”. Although this report is still in its draft form, it’s publication will improve the accuracy and consistency of performing LCAs on lubricants.

Over 50 billion litres of lubricants are sold annually. Approximately half of this volume is formulated into engine oils and the other half is formulated into industrial lubricants. If only 1% of the industrial oils doubled their oil drain interval, this would equate to a reduction of over one million metric tons of CO2e per year.

This is one of the reasons why Fluitec has developed the concept of Fill4Life lubrication. This practice converts lubricants from a consumable into an asset. Like any other asset at an operating plant, the lubricant’s life is optimized rather than being treated like a consumable. Actively removing dead oil molecules while replenishing the lubricant with fresh additive components allows for the life of the oil to be significantly extended. Fluitec’s Solvancer® family of technologies have been formulated to optimize oil life and performance. For example, DECON AO was developed to deplete the sacrificial antioxidants in turbine and compressor oils. Long-term field studies have demonstrated DECON AO’s ability to more than double the life of in-service lubricants. The range of Solvancer technologies, including the world’s first Fill4Life turbine oil can be seen in Figure 6. 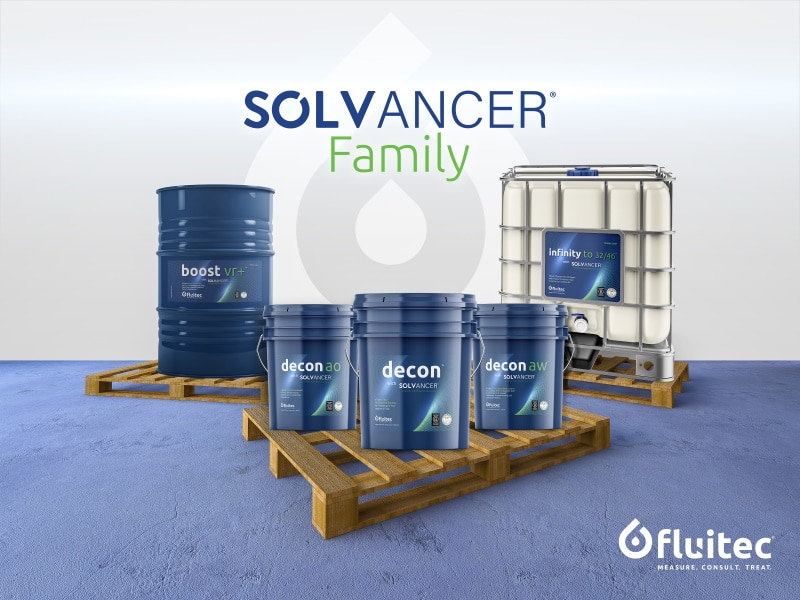 The oil must be kept clean and free from moisture while maintaining a healthy balance of additives to increase its life span. Fluitec’s Electrophysical Separation Process (ESP) VITA units can assist in removing varnish related deposits from the oil. Furthermore, ESP removes some of the free radicals in the oil which consume antioxidants and can increase the life of the oil by >50%.

These solutions have been independently verified by the Solar Impulse Foundation, resulting in the Fill4Life solution being granted the exclusive Efficiency Solution award in 2019. Solar Impulse Foundation created this award for technologies that simultaneously address climate change while enabling economic growth. An independent Life Cycle Assessment demonstrated a reduction of >90% GHGs with Fluitec’s Fill4Life solution. In addition, average cost savings are over 60%. Fill4Life is at the intersection of sustainability and economics and represents a positive movement in the energy industry’s decarbonization efforts.

Overall, the drive towards lubricant decarbonization will only begin when there is a change towards more sustainable practices. This can be initiated by increased awareness of the environmental impacts of the various industries on the planet. The pathway towards keeping the temperatures below 1.5°C by the year 2100 can only be achieved if we all work together to help reduce our GHG emissions.