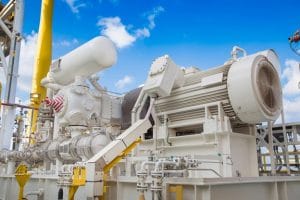 Compressors can be found in numerous places and industries. Usually, the large industrial, primarily axial and radial type compressors are critical in industries such as refineries, steel, petrochemical, chemical and even in food and beverage. These compressors are usually subjected to high thermal stress and possible ingression of reactive gases. These can significantly contribute to some of the major causes of lubricant degradation acceleration in compressors. Another factor which contributes to accelerated degradation is the change in formulation of more modern oils.

Why does formulation matter?

The global shift from Group I to Groups II & III base oils has resulted in a change in the behaviour of the solubility of the degradation products typically formed. By extension, this also affected the manner in which degradation occurs. In the past, with the traditional base oils, degradation occurred in a linear fashion. Now, with these advancements and change in base oil groups, it has been noted that the oils fail at a faster rate which is not linear.

As base stocks have advanced, so have their additive chemistries. With all of these advancements, it is no surprise that the deposits being formed are now more complexed with some unique characteristics. What doesn’t change is that oil degradation products can be either organic and soluble or inorganic and insoluble in nature. However, the traditional oil analysis tests may not be most suited for detecting these deposits. 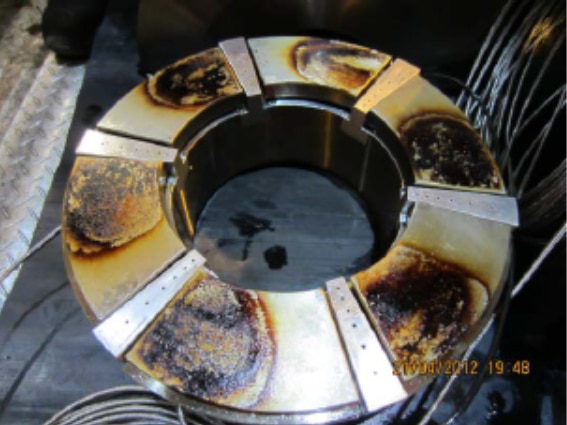 As with most oils, degradation occurs within their lifespan. Oxidation is the main cause of deposit formation in compressors due to accelerated temperatures, metallic components and gaseous catalysts. However, thermal degradation also occurs within compressors in the forms of microdieseling and electrostatic spark discharge where there is an absence of oxygen. Microdieseling occurs in compressors which experience ingress of air or gases due to the implosion of air/gas bubbles as they migrate from low pressure to high pressure zones.

Electrostatic Spark Discharge occurs when static electricity is accumulated as rapidly flowing, non-conductive lubricants are passed through small spaces until energy is released in the form of a spark. For the Group II & III oils, the conductivity levels are very low and the fine filter medium and porosities are not able to dissipate the generated charges. This accumulation of charges results in sparking which causes extremely high temperatures and thermally cracks the oil. Additionally, incompatible contaminants such as compressor gas can react with additive formulations or base oils to form precipitates, gels and deposits.

Which are the most suitable oil analysis tests?

It has been proven that oil analysis tests such as viscosity, acid number and ISO particle are not able to predict the formation of lubricant deposits. The polar products formed in lubricant degradation are typically less than one micron in size which is undetectable with routine analysis. Additionally, with the newer lubricant formulations, the oil no longer degrades in a linear form. This non-linear degradation results from the antioxidant selection as well as the oxidative stability of Group II & III base oils. Groups II & III have less oxidative stability than Group I base oils and once the antioxidants are depleted, the Groups II & III base oils degrade quickly.

Extremely small, sub-micron contaminants are usually formed when antioxidants degrade. Tests such as ISO particle count measures particles greater than 4 microns. Hence, it will not detect these sub-micron particles. On the other hand, the Membrane Patch Calorimetry (MPC – ASTM D7843) test has been proven to more accurately identify these varnish precursors. In this test, the sample is mixed with solvent and filtered through a patch. The colour of the patch is then analysed and the total colour is reported.

As we have seen, the antioxidants are the first line of defence for the lubricant. When there are thermal or mechanical stresses, the antioxidant package depletes. Therefore, direct monitoring of individual antioxidants can aid in understanding how the lubricant degrades. FTIR (Fourier Transform Infrared) analysis can be used as it can easily detect molecular changes as lubricants degrade. Additionally, RULER (Remaining Useful Life Evaluation Routine) is designed to identify the type of antioxidants in the oil and compares its results to new oil. This allows the user to determine how much antioxidants have depleted (given in a % format). 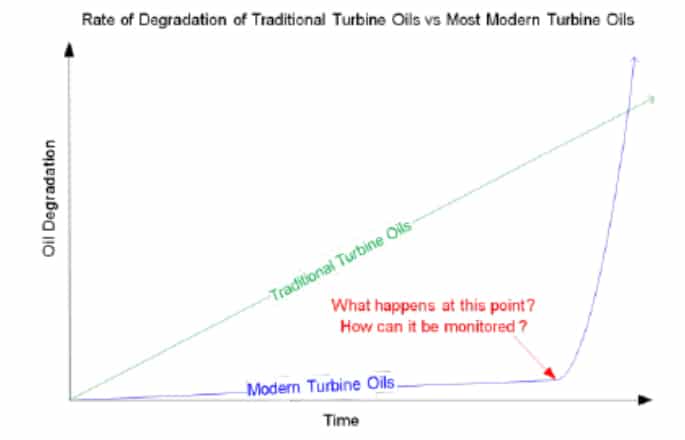 Essentially, there are several tests which should be used when monitoring compressor oils:

ISO particle count ISO 4406 – for this test, one should monitor the increase in the 4-6m contaminants as this is the range which will be indicative for the presence of soft contaminants

Air Release testing (ASTM D3427) – finely dispersed bubbles may cause the oil to lose its ability to maintain oil pressure, resulting in cavitation/microdieseling, incomplete films on bearings, gears or even failure. By comparing the air release value to the performance of new oil, the user can determine whether any type of damage or contamination has occurred. Additionally, due to the polar nature of varnish submicron contaminants, the air release characteristics are reduced.

Metal Analysis by ICP – by monitoring the presence of white metals (particularly Antimony), users can determine if metallic wear has occurred. The consumption of Phosphor should also be monitored as it can be related to the EP (Extreme Pressure) activities of this component.

While determining the type of test is essential this works in tandem with the correct oil sampling interval. Compressors are usually sampled every 3 months however, oil sampling frequency should be adapted based on the condition of the oil. For instance, if we realize that the RULER value starts trending below 50%, it will be a wise idea to double the oil sampling frequency. We should treat every variation from the normal depletion trend as a strong possible indicator of degradation.

A refrigerating gas compressor plant began reporting issues in their radial compressor part of their equipment. The compressor seal rings showed a high amount of dark brown deposits and varnish. Additionally, the journal bearings reported an increase in bearing operating temperatures of 10-20°C. Also, the main lube oil filters had black deposits which looked like tar (as shown in the pictures below). The deposits on the seal rings had a big economic impact on the flaring gas operation from an environmental aspect.

Organic varnish was detected (based on carboxylic acids created by water and oxygen presence) as well as three types of inorganic varnish. These inorganic compounds were; sulphate and phosphate, soot and coke. The presence of soot and coke supported the observation of microdieseling, this was confirmed by FTIR and chromatography (as shown in the picture below). Oxidation degradation was also present on the seal rings. From the air release values, it can be concluded that the air/gas bubbles did not have enough time to be separated in the lube system.

A varnish scavenging and cleaning operation was deployed to ensure that there would be no cross contamination of the previous oxidation products with the new oil. The new oil system was treated with a varnish mitigation system to remove any formed varnish or soot and to keep the oil clean during its operation. The table below compares the initial results from the plant (when the varnish and soot were present) and 16 months after the new oil with the varnish mitigation system.

Picture of chromatogram of varnish sample collected from seal rings